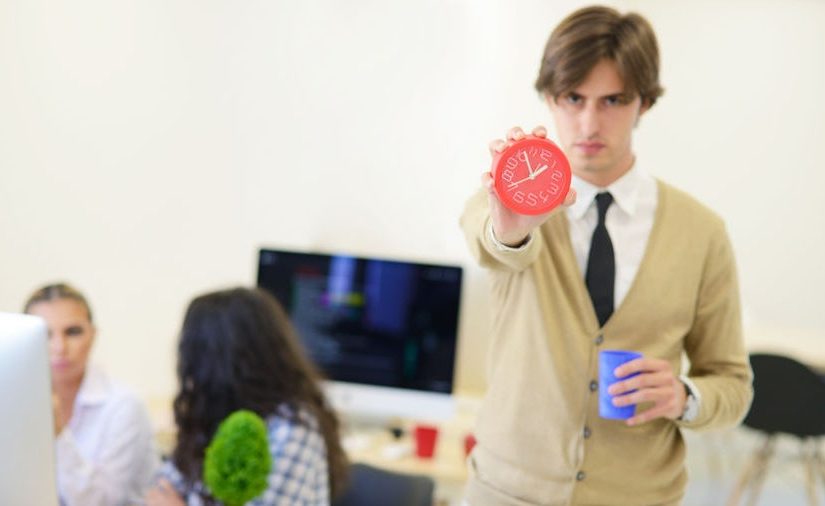 In business, there’s no such thing as fashionably late.

Yes, things may happen from time to time that keep you from being prompt. Things like miscommunications, location mix-ups, and traffic accidents. But if you’ve slipped into a pattern of making punctuality the exception and not the rule, it’s time to change your ways.

Oh, come on. Everyone is late sometimes.

Yes. This is true. And occasional tardiness is usually forgiven, especially when there are extenuating circumstances. But that doesn’t mean you get a free pass to show up wherever, whenever.

People know the difference between someone who arrives late every once in a while and someone who can’t seem to get anywhere on time. Like, ever.

And do you know why? Because over and over again, you’ve shown them which kind of person you are. And they have no choice but to believe you.

Being chronically late is a big trust destroyer. And resentment builder. And morale buster. None of which are good for business.

When you don’t show up on time, you’re essentially defaulting on an agreement. For whatever reason, you decided it wasn’t important to hold up your end of the bargain.

This stings. Especially when everyone else made it a priority to honor the arrangement. It also creates anger and resentment among your team.

Once you’ve established yourself as that person who doesn’t care enough to honor your commitments, people will start treating you that way. They’ll accept that you can’t be counted on, and adjust their behaviors accordingly. No one will be surprised or say anything when you’re late, because that’s just you delivering on your promise of being unreliable.

To a chronically late person, this reaction might seem pretty great at first. But don’t mistake these coping mechanisms for approval.

Here’s what you don’t see

Eyes will roll when your name gets mentioned. Colleagues will count on you not coming through, and brace themselves to pick up the slack. Over time, you’ll get invited to fewer and fewer things, leaving you with fewer and fewer opportunities to demonstrate your lack of respect for the team.

In essence, you’ve just become your own worst enemy. And it’s going to hold you back.

But there is hope

Lateness is not innate. You weren’t born with it. It’s a routine that was established over time. All you have to do is kick the habit. But first, you have to look at why you’re always late.

It won’t take that long to get there! I can squeeze these two more things in before I go! Parking is never a problem! I have time to stop and get coffee! Everyone on the team loves me! They won’t mind if I’m 5 minutes late!

If this is you, congratulations! You’ve got that positive thinking thing down. But there’s a fine line between being optimistic and being delusional.

If you find yourself constantly running late despite your great attitude and your best intentions, there is a disconnect between your vision and your reality.

If accurate time estimation is your issue, try this trick: Ask yourself how long you think it will take you to do something: finish a work task, get from point A to point B, grab a coffee. Then time yourself. Don’t rush through the process. Proceed as you normally would. Take a look at your actual time. Were you right or were you wrong? Compare the results and adjust your expectations accordingly. And always, always give yourself a 10 – 15 minute buffer in case something doesn’t go according to plan.

If you truly believe people don’t care if you’re late, time isn’t the only thing you’re not grasping.

Sometimes, it’s the sweetest, nicest people who are chronically late. Ironically, these are the very same people who would never want to let anyone down.

The problem is that by saying yes to everything, you’ve set yourself up for failure.

In your resistance to saying no, you’ve overscheduled yourself to the point where you can’t possibly be on time. Or maybe you were going to be on time but then said yes to one more thing that made you late. Or perhaps you let your last commitment keep you longer than it should have because you just couldn’t bring yourself to cut someone off, refuse that last cup of coffee, or leave an event that was running over on time.

Unfortunately, this emphasis on saying yes is making some very nice people seem like very big jerks. And that’s unfortunate for everyone.

Kicking this habit starts with learning to set boundaries— and sticking to them.

Try working with a therapist, coach, or snuggling up with a boundary building self-help book like Where to Draw the Line. Just make sure you put it down in time to get to your next appointment.

No one’s going to be there on time. Everyone always shows up late. If I get there early, I might have to talk to people and/or sit around awkwardly. This meeting is stupid anyway.

Pessimists often like to refer to themselves as realists. And if this is your reality, it’s no wonder you’re not motivated to arrive on time. But reality is really just perception, and perhaps yours is a bit skewed. How many times have you been dragged into something kicking and screaming only to admit afterwards that it wasn’t that terrible. Maybe it was even fun?

Yes, we’ve all been to our fair share of bad meetings, but getting there late doesn’t make them any better. In fact, this kind of behavior can actually raise the levels of tension and conflict in the group. In other words, you may be creating or magnifying your perceived reality by showing up late. Plus, you’re also creating a negative perception of yourself in others by appearing to be impolite, self-centered, and unreliable.

If you really want to be a realist, start using your power of observation to watch how your behavior affects your reality. Notice how things go when you show up on time or early instead of at the last minute or late. See how people react to you, and how it changes the course of the session.

If you’re feeling really inspired, try noting how things go if you show up early, and with coffee and doughnuts. Now that’s a reality we can all appreciate.